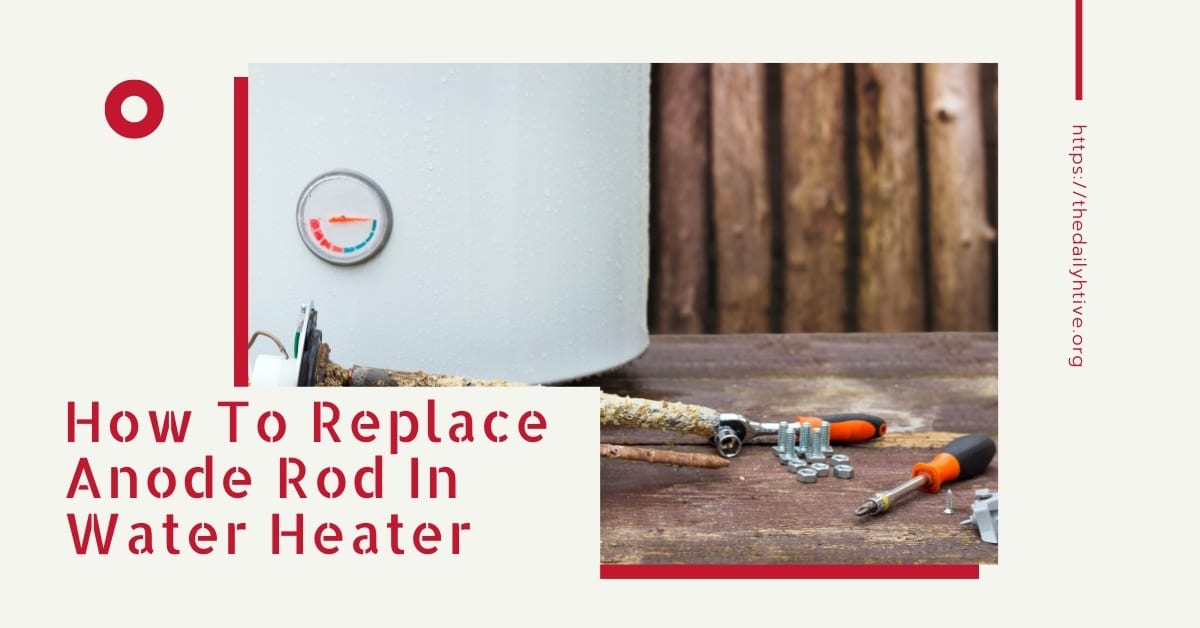 Anode rod is one of the most important elements that keep an electric water heater functioning properly. An anode rod plays in preventing a water heater’s tank from rusting. A water heater without an anode rod would be useless!

An anode rod is also referred to as Sacrificial Anode Rod because the purpose is to keep rust and corrosion away from the water heater tank’s inner metal lining. The rod plays a vital role, and it is often made of metals such as aluminum or magnesium anode rod.

The newer water heater use anode rod made out of a combination of zinc and aluminum, though these are mostly used in ship tanks. You can identify the water heater anode rod by looking for a rod that slightly protrudes from the tank’s base.

Let’s take a look at the electrochemical process involved in corrosion. Started with the elements that make up each of the components that are involved in the process of corrosion, such as:

In its basic form as H2O, water acts as an electrolyte that forms an electrochemical reaction with iron (Fe). Note that iron is a chemical compound that binds quite easily with oxygen.

Everyone knows that iron is the basic component of most metal alloys. Once the metal comes into contact with water, the iron readily absorbs the oxygen to form iron oxide or rust.

One reason these rods are made of aluminum, magnesium, or zinc is that these metals are highly reactive compared to other types of metals. Once the metal is dissolved in water, it releases electrons. The water’s oxygen content absorption supplements the absence of these electrons in the iron.

This would then become a continuous cycle wherein the oxygen absorbed into the metal would then facilitate the release of more electrons, promoting the absorption of more oxygen. This goes on until the rod becomes completely corroded.

The electrons released from the rod do not stay long in the water since a cathode absorbs these. Some water heaters have separate cathodes located a few inches away from the anode rod.

In this case, it is often made of a different metal that is not as reactive to electrolytes as the metal used on the rod. However, there are also certain types of water heaters whose cathodes are incorporated into the main body of the anode rod.

Water heaters for home use are often equipped with anode rods that can last for up to 5-6 years. Homeowners would usually know when the rod would have to be replaced by simply looking at the length of the heater’s warranty.

An anode rod is often the first thing that expires among the heater’s various components. This is why once the heater reaches its 5th or 6th year of use, homeowners would have to be alert for any signs that the rod is failing.

How to tell if the water heater anode rod is malfunctioning?

Some signs to look out for:

If these signs are present, then it means that the water heater’s anode rod might have to be replaced. In some cases, it may already be too late, especially if there is already a high volume of debris in hot water.

The reason why water heaters come with a specific warranty period is that manufacturers are fully aware of the short anode rod’s life span. This means that once the time comes for you to call a technician to check on the water heater, it could already be too late.

This is why homeowners are advised to replace the anode rod even before the warranty expires. This would ensure that the rod is still functioning correctly and corrosion has not started on any part of the tank yet.

We have a great section on detailed water heater maintenance and replacements with easy-to-follow instructions. Follow the steps below when replacing the Anode rod:

Note that the rod is normally fastened on the tank through a hexagonal head that is securely screwed onto a part of the tank’s top plate covering. In some cases, rust and corrosion might already have developed around the hexagonal head of the rod due to its constant exposure to moisture. This could add to the head’s tight fit.

Most experts suggest applying a coat of lubricant on the hexagonal head prior to prying it loose. The lubricant would ensure that the head can easily be turned clockwise.

Once the lubricant has been given enough time to penetrate the inner recesses of the hex head, wrench it out with the use of special tools such as an impact or a socket wrench. The type of wrench to use for unscrewing the hex head depends on whether the head is protruding over the top of the water heater’s tank or recessed onto the main plate of the tank head.

Never attempt to wrench the hex head with your bare hands. It is usually impossible to unscrew the head manually. The friction caused by handling the head could also cause injury to the hands, especially when the head is still warm.

As soon as the head is unscrewed, simply pull out the anode rod. This step can easily be accomplished since the rod is normally not attached to any other component on the tank.

While unscrewing the hex head, lookout for any water heater that might leak out of the opening created by the separation of the head from the tank. If there is some leakage, drain more water off the tank before completely removing the anode rod.

As previously mentioned, bend or tilt the tank a little to the side if there is insufficient overhead space for completely removing the rod out of the tank.

When replacing the water heater anode rod, it is important to note what type of metal was used for the current rod. It is not advisable to replace it with a different rod type since this might not be compatible with the rest of the tank’s components.

If the original anode rod is made of magnesium, replace it with a magnesium rod. However, since most metals can look the same to the untrained eye, it could be difficult to tell whether the rod is magnesium, zinc, aluminum, or a combination of zinc and aluminum.

One way of differentiating the water heater anode rodis by checking on the top of the rod’s hex heads. Magnesium rods always have a bump on their hex head, while aluminum rod hex heads are completely flat. If unsure, bring the rod to a store so that the experts can verify what type of rod it is and provide the correct replacement.